As a result of finishing our multi-year project to ski the 100 tallest mountains in Colorado, we were nominated as National Geographic’s Adventurers of the Year for ski mountaineering.

After a lifetime of skiing and decades of ski mountaineering it was a high honor.

“ON MAY 23, professional ski mountaineers Chris Davenport and Ted and Christy Mahon stepped off of a sightseeing train and into Colorado’s remote Weminuche Wilderness. Four days later, they would need to make it back to the same spot at a precise time to catch their ride out of the mountains. In the meantime, they would hike two days of trails covered with snow and littered with fallen trees and attempt to climb the steep, snow-covered rock that guards the summit of 13,824-foot Jagged Mountain. Only then could they hope to ski the line they had spotted from the air, one that no one is known to have skied before.

The objective could have warranted an expedition of its own, but when Davenport and the Mahons made their last ski turns back to the base, for them, it signified an appropriate finale to a much larger project: to become the first to climb and ski the Centennial, the hundred tallest mountain peaks in Colorado. From start to finish, the feat took them over two years.

Given Colorado’s pervasive peak-bagging culture, the state’s 14,000-foot peaks get an enormous amount of attention from outdoor enthusiasts. Every year, more than 100,000 people hike a Colorado “fourteener”—the term used to describe these 14,000-foot summits. A long list of people have climbed all 53 of the peaks, but only an elite handful of athletes have climbed and skied the fourteeners. In 2007, Davenport became the first to accomplish the feat in under a year, and the second to do so at all; the following year, Ted became the third, and, in 2010, Christy became the first woman to do so.”

In May 2003 I summited Mount Everest. The circumstances were unique....

Our Centennial Ski Project in 2015 attracted a lot of attention. Here's one story we interviewed for in Powder Magazine afterwards. 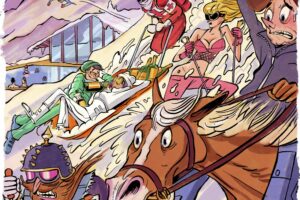 Slopeside shenanigans, gallons of sprayed Champagne, celebrities behaving badly, and… ski gangs? It’s all in a day’s work at Aspen.