For Some Skiers, It’s Uphill All the Way – New York Times

For Some Skiers, It’s Uphill All the Way – New York Times

You know it’s growing in popularity if The New York Times is asking questions for a story. I contributed some thoughts to a piece For Some Skiers, It’s Uphill All the Way. Read the story or link to the online version here

In a DIY precursor to downhill skiing, the latest on-slope trend is to go uphill.

Called skinning, the activity of walking up a downhill slope on skis to schuss back down exemplifies a no-pain, no-gain ethos among skiers determined to earn their turns for the sheer challenge (or to burn calories). Skinning falls under the family of activities known as uphilling, which includes snowboarders using special split boards, snowshoers and hikers.

He added that it can be “meditative” with “an almost Zen-like winter stillness where all you hear is your breath and the sound of the skis sliding on the snow.”

What was once strictly a backcountry practice, used to explore ungroomed, off-piste terrain, is becoming more common in the front country. Fifty percent of ski resorts in the country now allow uphill skiing on their slopes, according to the National Ski Areas Association, an industry resort group. Several are adding new uphill ski races this year.

In addition to physical fitness, skinning requires special ski boots and bindings that free the heel to march up a mountain. Non-slip “skins,” special coverings that prevent the skis from sliding backwards, go on the bottom of the skis for the vertical trip.

Sales of alpine touring equipment used to go up and down hills rose 13 percent last year, according to Snowsports Industries America, a nonprofit trade association representing ski manufacturers and retailers, and the trend has led to lighter downhill skis.

“You can hike up before the lifts open and get first tracks down,” said Nick Sargent, the president of Snowsports Industries America. “The weekend warrior is getting the most out of the day by hiking up in the morning.”

As uphilling has increased in popularity it has forced ski resorts to reckon with safety issues related to two-way traffic. Resorts that allow vertical ascents often have a designated uphill zone that is sometimes cordoned off from the rest of a run to prevent downhillers from entering uphill territory and vice versa. Some allow it at specific times or only on specific trails.

For skiers, the practice offers a new way to explore the mountain, especially if downhill conditions are marginal, as in the case of warm weather or light snow cover. Beginners may try it, according to Mr. Mahon, as long as they climb a run they can handle going downhill or take the ski lift or gondola back down.

“If you’re just getting started and you’re building your skills and confidence, embarking on a ski run with tired legs after a large physical effort isn’t something most beginner skiers get excited about,” he said.

At resorts, uphill access policies vary. Sometimes a lift ticket is required, other times it is discounted or free. Windham Mountain in the Catskills Mountains of New York offers an uphill ticket for $10 a day or $25 for the season and Killington Resort in Vermont offers an uphill season pass for $20. Arapahoe Basin in Colorado normally offers free uphill access, pending avalanche mitigation work.

Because it requires special gear and different skills, some ski resorts are adding skinning to their ski school menus or holding special events related to it. Other outfitters offer guided trips in the backcountry. The following are some ways to circumvent the chairlift before pointing your skis downslope.

WHERE TO FIND A GUIDE

Aspen Skiing Company, which operates Snowmass, Aspen Mountain, Aspen Highlands and Buttermilk in Colorado, has embraced uphilling, adding Dynafit uphill skis to its rental inventory this year. Aspen Snowmass offers both private and group full-day lessons (group lessons start at $164 a person and private lessons cost $795 a day for up to five guests).

Near Lake Tahoe, Calif., Kirkwood offers an extensive backcountry education program for experienced skiers that includes workshops on Jan. 20 and Feb. 3 ($200), and regularly available private guides ($465 for a half day).

In the Canadian Rockies, Lake Louise Ski Resort and Yamnuska Mountain Adventures have teamed to offer guided tours for intermediate and advanced skiers just outside of the ski resort boundary ($210 Canadian dollars, or about $165).

For intermediate and advanced skiers, High Sierra Snowcat & Yurt in California’s eastern Sierra Mountains has added guided backcountry trips that involve yurt-to-yurt transit both uphill and down ($295 a person each day, including meals, accommodations and guides).

In Utah, Utah Ski Mountaineering, a nonprofit group, compiles uphill policies at ski areas throughout the state. Brighton Resort operates a stoplight system to indicate whether its designated uphill routes are open.

Visitors to Las Vegas can take a winter break at nearby Lee Canyon where uphill traffic tripled last year. Uphill skiing passes are complimentary, but skiers must check in at the base lodge before ascending.

Solitude Mountain Resort in Utah does not allow uphill travel regularly “due to the tremendous amount of avalanche mitigation work that is frequently conducted throughout the winter season,” Sherri Harkin, a spokeswoman for the resort, wrote in an email.

Nonetheless, it plans to allow uphilling at the resort on two days this season during its Utah Skimo Race series. Events take place after the regular ski day ends on Jan. 30 and Feb. 13. Skiers must bring their own gear and rentals are available at Wasatch Touring in Salt Lake City.

Near Denver, Winter Park Resort will hold its first Uphill Battle on Feb. 10. Participants race to 10,713 feet before skiing back down to compete for the best time. There is also a snowshoe option.

Other Colorado resorts holding uphill races and parties include Aspen, where America’s Uphill race, a 2.5-mile, 3,000-foot vertical climb up Aspen Mountain, will take place March 30. Breckenridge will offer an Ascent Series of ski mountaineering races on Wednesdays throughout the winter season. Crested Butte will hold four full moon parties at its mountaintop Umbrella Bar for uphillers this year.

In Canada, Mount Tremblant, about a 90-minute drive north of Montreal, began offering uphill touring four years ago and celebrates the practice during its Festival Rando Alpine Tremblant, which will take place from Feb. 2 to 4. There will be a sunrise ascent as well as the Night Traverse, featuring an uphill hike beginning at dusk and a return down a freshly groomed run using headlamps. 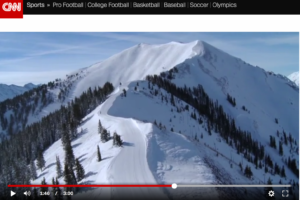 Back in 2015 I was skiing with team from CNN International who seemed more interested in the celebrity status of Aspen than the skiing. Who can blame them? 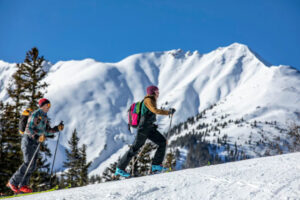 I had the opportunity to go skinning with a reporter from the Washington Post and go over all things uphilling. 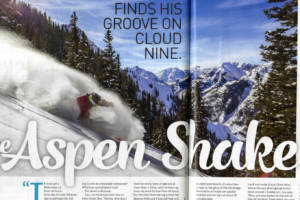 I had an awesome day on Aspen Highlands with Canadian ski journalist Steve Threndyle who wrote this piece about his ski experience and the Cloud Nine party.